James Burns of Seattle is being recognized for his heroism that saved one man from harming himself and another from posing a threat to others on a freeway.

Burns is being recognized for his compassion and bravery during two standout calls last year. The first call involved a patient threatening self-harm. Burns was able to intervene and help convince the patient to seek immediate care. The second, he extricated an incapacitated patient from a vehicle that posed an immediate threat to others on a major freeway

“James is a true servant-leader who demonstrates great commitment to his job and community,” said KC McCoy, Operations Manager for AMR Seattle. “He never wants to take credit for all the good he’s done, but rather gives the credit to his teammates. He is a role model and an example of integrity in the workplace.”

James said initially his desire to help others led him to pursue a career in law enforcement, but that he soon felt drawn to become a first responder. “I began working in EMS just two years ago. I’ve always wanted a career where I could help those in need, and this is without a doubt the field for me. I feel very honored to be recognized with this award.” 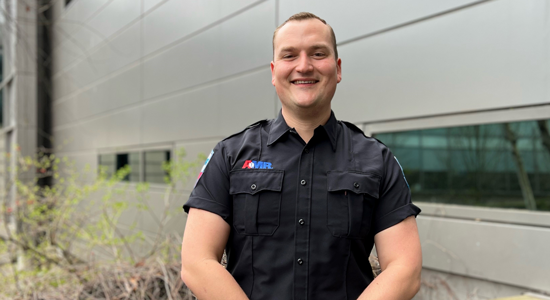